Doctors work long and hard to earn their white coats. When patients see a person wearing a lab coat, their trust increases in that person. That’s because the white lab coat signifies that person is a scientific healer.

“As opposed to what other kind of healer?”, you may be asking. But historically, the realm of medicine actually had very little to do with science and everything to do with home remedies, folklore, and quackery.

As a matter of fact, the field of medicine was not considered a well-respected branch of science until the 1900’s, when many strides were being made in the medical field. Scientists quickly realized the medicinal applications of their new discoveries, including antiseptics and anesthesia. Before then, doctors were essentially glorified barbers with little to no formal training, unless they were quacks who took advantage of others’ suffering and desperation for their own financial gain.

But as medicine began to grow into a more well-respected field, true doctors – the scientific healers – began distinguishing themselves with a long lab coat. At first the coats were beige out of practicality, but they eventually turned to white as it symbolized purity and sterility.

What do you think of these modernized versions of the white lab coat? 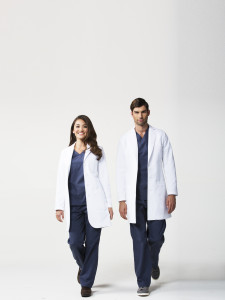