As with medical knowledge, medical uniforms, and medical treatments, spaces for healing and medicine have evolved through history. Today you can visit a private practice or hospital, but where did patients from the past go when they were sick? 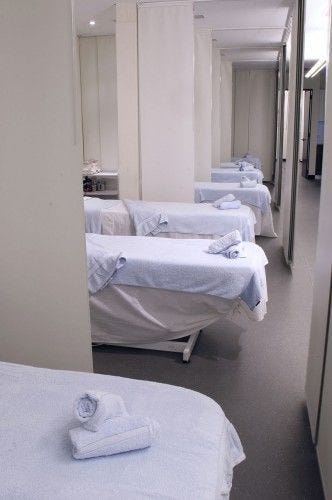 In the ancient world, hospitals did not exist as they do today. Illnesses were often considered to be connected to the mind and spirit, and treatment was more spiritual than physical. Egyptian “sleeping temples” have been discovered that date back to 2000 years BC, where patients would be treated by priests through methods such as hypnosis and chanting.

Although the ancient Greeks are considered by most to be the founders of ‘rational’ medicine,there were no designated institutions for the practice of medicine as we know them today. Physicians and healers would visit upper-class patients in their homes, and sometimes even allow a patient to stay at their private residence but the closest thing to a hospital in this day were the healing temples of Asclepius. One of the earliest known healing temples was built in 430 BC in Epidaurus, a city in ancient Greece. This temple originated as a healing shrine, where a patient would spend the night in hopes of being visited in a dream by the Greek god Asclepius. A priest would then interpret the dream of the patient and determine a sort of treatment. The temple also acted as a sanctuary for seriously ill patients to stay. As more temples of healing began to be built throughout Greece, the original temple at Epidaurus was expanded by Roman emperor Antoninus Pius, who added a 180-room structure to house the dying and women in childbirth. These Greek healing temples temples were founded by the cult of Asclepius, who worshipped the mythical Greek god, often depicted as holding a staff with a snake wrapped around it—the modern symbol of the medical profession. Hippocrates, the founder of the Hippocratic oath that all doctors must take today, was a devotee of Asclepius. 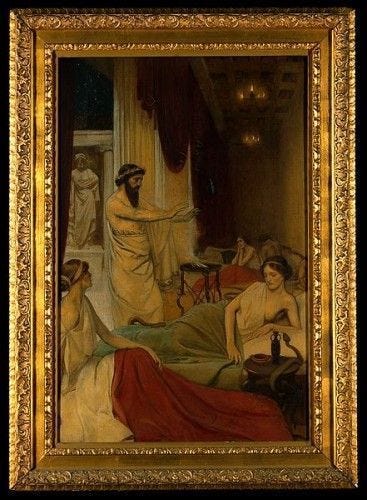 The earliest ‘hospitals’ as we know them today were the Roman military hospitals, which consisted of patient rooms built around courtyards. Historians believe each room held three patient beds, which indicates the earliest concept of ward systems. Public hospitals were still not available at this time, but as the Roman Empire began to build its foundation upon Christianity, the church began to establish its role in caring for ill and injured patients. Many monasteries were constructed with wards for poor and sick people, and the great emperor Charlemagne decreed that a hospital must be attached to every cathedral built in his empire. At this time, around 400 AD these religious hospitals provided healthcare to the poor while the upper class continued to receive house calls from physicians.

The spread of Christianity played an immense role in expanding healthcare provisions for the public. The ward system of these early religious institutions, which would house multiple patients in common spaces, became the standard layout of public hospitals for hundreds of years. The highest quality healthcare facilities of the Middle Ages were found in Florence, Italy, where the Roman Catholic healthcare wards were known for their quality physicians and clean beds. The first secular medical institutions were the London hospitals of St Bartholomew’s, St Thomas’s and St Mary’s—all funded directly by the crown under the rule of Kind Henry VIII, who had dissolved all Catholic monasteries in the city. 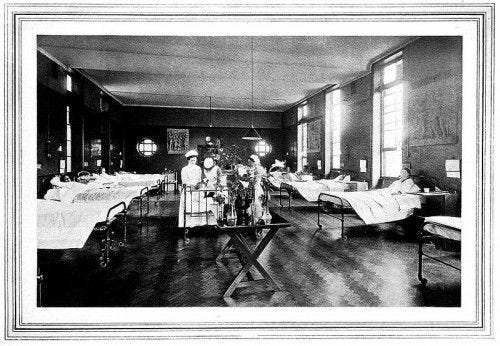 As the years passed, public hospital wards became bigger in size and dangerous for patients. The larger wards were often poorly lit and ventilated, unsanitary, and prone to spreading infectious diseases. Some hospitals housed more than 100 beds in one ward and would have more than one patient in each bed. This problem was solved with the implementation of the ‘pavilion’ plan, which provided fresh air and daylight to patients, improving recovery and reducing mortality. This pavilion design was used to construct the St Thomas Hospital in London and the Johns Hopkins Hospital in Baltimore.

The general perception of public hospitals as being associated with poverty and death changed as hospital facilities were improved and medical knowledge became more advanced. Hospital layouts were better designed, and by the early 1900’s the need for private patient rooms in public hospitals began to be recognized. Private rooms are far more expensive than wards, and even today in some developed countries there are hospitals that do not have any. In modern times, the ward layout of hospitals is omnipresent although there is a trend in the US that almost all new public hospitals are built with private patient rooms. Private rooms are naturally the preference among patients, but today we face the challenge of providing cost-effective solutions to provide better patient care in hospitals.